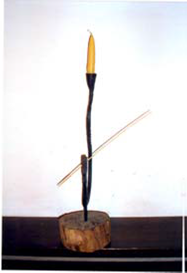 Not only did the days become cooler, but by November there was considerably less daylight coming through the windows of colonial homes. As the outdoor tasks of butchering, gathering wood, harvesting crops and building repair were completed in anticipation of shorter and colder days to come, various lighting devices were readied for use to supplement and extend what daylight was available.

Candles by the dozens had been hand dipped or poured in tin molds utilizing the fat from butchered animals. In New England fragrant bayberries were pressed and the wax was used for candles in that region. Many lighting devices made of wood or iron also supplemented the light from the candles or held the candles to utilize the light more efficiently.

The earliest of these supplementary lighting devices was the grease lamp. Fashioned from sheet iron with a fiber wick that was lit, fat scraps, grease, fish or vegetable oil fuelled the flame. Usually they expelled more smoke and smell than light, but the uncovered or covered (betty lamp) grease lamp was used for centuries. Rush lights were another popular lighting device. They were made of wrought iron (usually with a wooden base). The pith of a rush was soaked in grease, placed in pliers-like jaws and lit. Sometimes they were made with a socket to also hold a candle. These rush lights were made to fit on table tops with a larger version that stood on the floor and the height was adjustable. 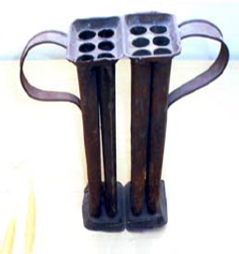 The same holds true for the many types of candleholders that were used. Made from tin, brass, iron, pewter and earthenware these holders were as plain or decorative as the household could afford. Sconces hung on the walls, mostly made of shiny reflective tin. Some were backed with mirrors to better reflect the light out into the room.

Lanterns were made of tin or wood with transparent windows made of glass or horn (horn could be split, flattened and pressed into sheets, then scraped thin to let the light through). Lanterns allowed the colonists to carry light from room to room or outside without fear of the candle being extinguished by the wind.

Your ticket for the: Colonial Lighting