History of the Senate House 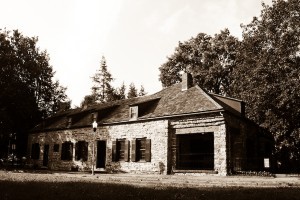 The building now known as the Senate House was built in 1676 by Wessel Ten Broeck (born about 1636 in Westphalia, modern Germany). It was then a typical one room Dutch style house common at that time in the Hudson Valley. The foundation of the 1676 house is still extant and is beneath the middle section of the house as we see it today. Although we do not know the exact year, we know that an addition was made to the house in the late 17th or early 18th century, which consisted of a second room added to the north, and a detached kitchen to the west. Sometime later a third room was added to the south, and was initially used as a store, and later, in 1777, as the Senate chamber.

After Wessel Ten Broeck’s death, the house stayed within his family, and by 1744 was owned by Sarah Ten Broeck, who married Abraham Van Gaasbeek in 1751. Abraham and Sarah had three children, although one died as an infant. In 1775 their daughter Rachel died in childbirth, followed by Sarah’s death in 1776. With his son Peter serving in the militia, Abraham remained as the only family member living in the house.

Meanwhile, 1777 proved to be a momentous year for the American Revolution and for New York history. That year, New York served as the major theater of the war and New York’s government was created. In February the Committee of Safety met at Kingston for the first time. On April 20, 1777 the New York State Constitution was ratified in Kingston, and on July 30 George Clinton was inaugurated as the first Governor of New York at the old court house on Wall Street.

With unexampled cruelty, you have reduced the fine village of Kingston to ashes, and most of the wretched inhabitants to ruin. I am also informed, you continue to ravage and burn all before you on both sides of the river…

Other Generals…are now by the fortune of war in my hands; their fortune may one day be yours when, Sir, it may not be in the power of any thing human to save you from the just vengeance of an injured people.

With the newly created government arriving at Kingston, meeting space was needed for the legislature. Joint sessions were held at the court house. When meeting separately the Assembly met at the Bogardus Tavern, and the Senate found space in the Van Gaasbeek house. Van Gaasbeek was a merchant by trade, and his business included shipping dry goods from New York City to Kingston to sell in his store. However, with New York City occupied by the British and Hudson River traffic halted, Van Gaasbeek had no way of getting inventory to his store. Forging a mutually beneficial relationship, the Senate found a place to meet, while Van Gaasbeek received income by charging the Senate rent.

The Senate began meeting in this house September 9, 1777. Of the 24 Senators, 17 made it to Kingston to attend sessions. Pierre Van Cortlandt was chosen President of the Senate. Other Senators in attendance included Philip Livingston, Abraham Yates, Jr., and Levi Pawling, the only representative of Ulster County. Notable Senators not in attendance included John Jones, the foremost American physician of the 1770s, and Issac Roosevelt, ancestor of the future Presidents. During the month the Senate met here, it concentrated on establishing rules for the body, raising money and supplies for the militia, and responding to a message sent by Governor Clinton regarding the war and the newly formed government.

On October 6, the British took Forts Clinton and Montgomery on the Hudson River, after which little stood in between the British and the rest of the Hudson Valley. Soon after receiving news of the advancing British, the Senate adjourned and fled Kingston. The British, under General Vaughan, landed at Kingston on October 16 and burned the town. General Burgoyne, who had been leading the northern element of the British three pronged strategy, surrendered his troops to the Americans at Saratoga the next day. 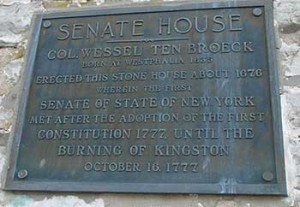 The house remained in the Van Gaasbeek family into the 19th century. Starting in 1827 it was briefly used as a girls’ school, but returned to use as a domestic residence by several families through the 1880s. Photographs from the 1880s indicate that by this time owners had built porches on the north and south ends, as well as a wooden addition on the back of the house.
In 1887 New York State acquired the house from a descendant of Wessel Ten Broeck, and made several changes, including taking off the wooden additions, adding living quarters for a caretaker (which was used until the mid-1940s), and building a kitchen designed to recreate a 18th century kitchen. Work was also done on the building in the 1940s, so the building as it stands today is a combination of 17th, 18th, 19th, and 20th century fabric.

The Senate House today is maintained by the New York State Office of Parks, Recreation and Historic Preservation through the Palisades Interstate Park Commission.

Your ticket for the: History of the Senate House

History of the Senate House