John Vanderlyn was born at Kingston, New York, on October 18, 1775, and became an important internationally known artist in the early days of the United States of America.
As a young man he was enrolled as a student of Alexander and Archibald Robertson at the Columbian Academy of Painting in New York City. There he learned the basics of drawing and design and the technique of miniature painting.

It was his copies of Gilbert Stuart’s portraits that brought him to the attention of U.S. Senator Aaron Burr who directed and supported the artist’s training over the next twenty years. Burr sent Vanderlyn to Philadelphia to study with Gilbert Stuart and then in 1796 sent him to Paris, making Vanderlyn the first American artist to receive formal training in France. 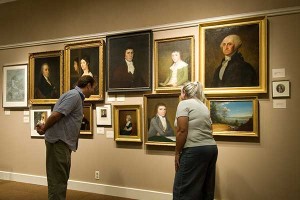 He returned to the United States in 1801 and lived in the home of Burr, then the Vice President. In 1802 he painted views of Niagara Falls, making him the first academically trained artist to do so. These paintings influenced the artists of the emerging Hudson River School.

He returned to Paris in 1803 and went on to Rome where he painted his picture of “Marius Amid the Ruins of Carthage” (1807), which was shown in Paris, won him a Gold Medal from Napoleon and established his prominence in the European art world. His sensual canvas “Ariadne Asleep on the Island of Naxos” (1808-14) was the first female recumbent nude painted by an American artist. Although it did not win him the acclaim he hoped for — on the contrary, it created a scandal –the famous work was frequently copied in the early nineteenth century.

The National Academy of Design had named him a member in 1826, but he refused the honor because of his involvement with the American Academy of Fine Arts. His New York Rotunda project failed and, discouraged and debt-ridden, he retired to Kingston in 1829. It was his unwillingness to commit himself to the commercial nature of his various exhibitions, combined with his tendency to delegate these details to those with little experience or competence, which led to his financial failure.
With the award of a commission for a painting on one of the panels inside the Rotunda of the Capitol Building in Washington, D.C., Vanderlyn returned to Paris in 1839 to execute the work. “The Landing of Columbus” was finally installed in 1846. An engraving of this painting was later reproduced on the Columbian 2c Postage Issue of 1893.It was also engraved for the U.S. five-dollar banknotes.

Unsuccessful in most of his later enterprises, he returned in 1852 to Kingston where he died in poverty on September 23.

The Senate House State Historic Site houses the largest collection in the world of his work as well as many of his personal papers and sketchbooks. The Vanderlyn Gallery in the Museum Building displays a survey of his art.

Your ticket for the: John Vanderlyn Biography