Today the museum contains three galleries. The Vanderlyn Gallery contains portraits, landscapes, drawings, and other artifacts related to the Kingston born artist, John Vanderlyn. Vanderlyn (1775-1852) was a protégé of Aaron Burr, studied under renowned portrait artist Gilbert Stuart, and was the first American artist to study in Paris. During his career, Vanderlyn produced portraits of James Monroe, John C. Calhoun, George Clinton, Andrew Jackson, Zachary Taylor, and Robert R. Livingston. Some of his well-known paintings include Death of Jane McCrea, Marius amid the Ruins of Carthage, and Ariadne. In 1842 he was commissioned by Congress to paint The Landing of Columbus, which is in the United States Capitol Rotunda.

Vanderlyn’s Panoramic View of the Palace and Gardens of Versailles was his grandest ambition. He sought to construct a building in New York City to display the 12 foot high, 165 foot long painting, but unfortunately, this did not happen. The panorama eventually returned to Kingston, before it was gifted from the Senate House Association to the Metropolitan Museum of Art in 1952. It is now displayed in the American Wing at the Metropolitan. The Senate House continues to own the largest collection of Vanderlyn works. Currently on display you will find View of Niagara Falls, painted 1842-1843, a modified version of Ariadne Asleep on the Island of Naxos, as well as other oils, watercolors, etchings, and sketches, including studies done for The Landing of Columbus. 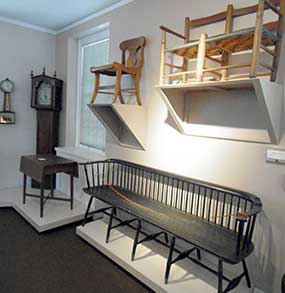 Showcased in an exhibit on colonial furniture are a stunning chairs, tables and other domestic furniture used by colonists in Dutch New York, such as spinning wheels, looms, and kitchen furniture.

The museum is also where you will find major works by Ammi Phillips, James Bard, Thomas Sully, the Kingston born Joseph Tubby, and the Hudson River School artist Jervis McEntee. Another notable object currently on display is the pilot wheel of the steamboat Mary Powell.

The Senate House Archives and Library are also located in the museum. Both are open to the public by appointment. In the library is a collection of local history books, genealogies, and published documents relating to New York State colonial history. The library also contains the published papers of George Clinton and Kingston City Directories dating as far back as 1857. The archives hold a large collection of 18th and 19th century documents, including manuscripts, deeds, wills, diaries, almanacs, maps, photographs, and other ephemera. Of note is the 1652 deed granting Thomas Chambers the land for what is now Kingston, documents from the 1770s relating to the Revolution, and John Vanderlyn’s correspondence. 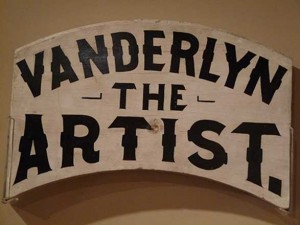 John Vanderlyn was born at Kingston, New York, on October 18,1775, and became an important internationally known artist in the early days of the United States of America, ...
read more

Your ticket for the: The Senate House Museum